Merge Magic! Was released earlier this month as a response to the great success of mobile gaming studio Gram Games’ other Merge games: Merge Dragons, Merge Town, Merge Farm and others. The game follows the same pattern as the aforementioned games – you match and merge elements to make them bigger.

But is Merge Magic worth playing or is it just another dime a dozen match 3 game? In this review we’re going to go over the gameplay, the graphics, whether the game is pay to win to give you an overview on whether or not this game is for you. Let’s get started.

In Merge Magic! the land has been corrupted and it’s up to you to lift the curse. You do this by merging plants and creatures.

When you first start playing Merge Magic you’re taken immediately into the game and the way to play is fairly straightforward; even if you have never played a merge game before it’s not hard to figure out. The levels start out easy but become harder as you progress further into the game. There are also timed challenges which give you decent rewards and where you benefit from solving the levels as quickly as possible.

You also have a home base – the garden. In this garden you can collect creatures and companions and build structures. This does add another dimension to the game which is quite fun but also raises a few problems – micro transactions – which brings us to our next section.

Micro transactions – Is it pay to win? 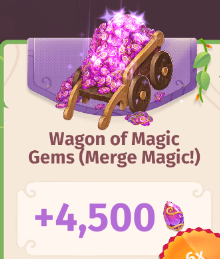 As with most free to play games nowadays, Merge Magic has quite a few micro transactions. The main premium currency is called Magic Gems. These magic gems are quite important in the game and have many uses. For instance, they can be used to unlock more rewards after completing a level. Furthermore, the creatures in your garden need to rest occasionally. You can skip this resting mechanic by using Magic Gems.

You also have compasses in the game. These are Merge Magic!’s energy system. You need compasses to keep playing. If you run out you can either wait, or of course, buy more.

While there are a lot of micro transactions in Merge Magic! if you play the game casually and don’t mind waiting it is definitely possible to progress through the game without having to spend money.

Overall, we’d say that the game does paywall a lot of content but we wouldn’t go as far as to call it pay to win. If you’d like to learn more about Magic Gems in Merge Magic! check out this post.

Graphics are always personal preference. What we like might not be your cup of tea in the slightest and vice versa. But in our opinion, the graphics of Merge Magic are quite nice. The creatures look good and are easily distinguishable from one another. What we do not like though is that there are quite a lot of loading screens which take the pace out of the game.

If you’re a fan of merging games or want to try one out we can recommend you to give Merge Magic! a shot. The game is quite enjoyable and the graphics are nice. It’s satisfying to pull off nice combos in the game and the progression system is quite good.

There are quite a few micro transactions in the game, but not to the point where it makes progressing without paying impossible. It’s especially good if you’re planning to play the game mostly casually. If you’re looking for something more hardcore we’d recommend you to look elsewhere, because Merge Magic! will most likely not be the game for you.

You can check out Merge Magic! for Android here, and the iOS version can be downloaded here.